Indian tribes called the stream Mineola, meaning “little river” and that became its name. Little River is one of the oldest settlements along the coast, with fishermen and farmers coming to stay in the late 1600s and 1700s. There are no records, but possibly they built small cabins on the wide tidal inlet, which narrows to a stream. The river became part of the Intracoastal Waterway in 1936.

The small protected harbor was a haven for shipwreck survivors and pirates, who needed a place for rest and repairs. The few settlers were forced to help pirates who demanded food and supplies, their weapons a persuasive factor. Names like Captain Kidd, Blackbeard, Stede Bonnette, Anne Bonney and others are part of the local lore. From time to time, maps appear as restaurant place mats, attempting to locate buried pirate treasure.

According to the highway marker south of Little River, the Rev. George Whitefield, the fiery “Oxford Methodist,” visited the village in 1740, confirming the fact of a settlement before that date. President George Washington noted that he dined with James Cochran in Little River in April 1791, as he traveled the King’s Highway on his Southern tour.

The “Robert Mills Atlas of Horry District S.C., 1828” lists Little River and Conwayborough as the only two villages in the county. Travel between the two was difficult because of marshes and river swamps.

Until recently the gaunt burned structure of a fine old house towered over the grassy slope near the harbor in Little River. It was the Randall-Vereen House, one of the oldest in Horry County until it burned. The house was one of three built by Capt. Thomas Randall of New England, who came to Little River after the War of 1812. For a time, Little River was called “Yankee Town” by the rest of the county, because a few people from New England had come there to live.

The village became a prosperous port in the 1850’s, shipping fine lumber and naval stores to Northern markets. It had a sawmill, waterhouse, stores, school and bank. Several churches were organized and people built nice homes. The Civil War wiped out this progress. A large salt works produced much needed salt for the Confederate Army until it was burned by Union forces. Shipping and fishing were at standstill, with coastal blockade.

“The American Guide Series, 1938” tells an interesting story about Little River in the late 1800s. By then, seagoing steamers made regular runs between Georgetown, Little River and Wilmington, loaded with cargo and passengers. Sewing machines were something of a novelty in the South and greatly needed for family sewing. The few women who had machines would graciously invite friends and neighbors to share their use. Summer afternoons found ladies gathered on wide porches, under sheltering oaks along the riverfront. The ladies might “piece quilts” or mend or sew for their families, taking turns to use the wonderful new Singer sewing machine. It looked like an old-fashioned “sewing bee.” Passengers on steamers coming into the harbor smiled and waved at the busy women, who happily smiled and waved back.

Through the years, Little River has reluctantly played host to pirates, smugglers, and blockade-runners in the Civil War. But road building in the 1920s and use of cars and trucks to carry people and good caused sea traffic and trade to diminish and finally disappear

Today Little River is widely known for it s deep-sea fishing, charter boats and commercial fishing. One of the sights of the day is to watch fishing and shrimp boats going out in the early morning for the day’s catch, with the sun coming up and mist rising from the calm inlet waters.

Little River remains unincorporated, with a 1990 census count of about 4,000 residents, but it is a fast growing community. A new post office, consolidated schools, golf courses, new homes and condominiums, motels and bed-and-breakfast inns attract new residents. Seafood has always been a drawing card, from the days when the Indians came.

Blanche Floyd is a retired history teacher and a member of the Horry County Historical Society. A free-lance writer, she is author of “Gentle Persuasion.” 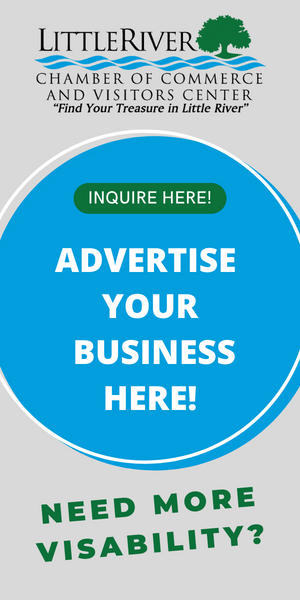